But it’s not working : Bubble support says it’s not a bug it’s just a feature that is not supported !

So I’m looking at workarounds to be able to store files in a private and secured manner while being able to send them through the API.

The DropBox plugin doesn’t seem to be downloading correctly files from DropBox according to the documentation : I would be able to upload the files in DropBox, but not to retrieve them from DropBox to forward them to the API connector.

I haven’t found any ways to copy or duplicate files in S3 either - that might have been another path to explore.

Any ideas or suggestions ? That would be a great help.

If you store a file as part of a thing, you can setup privacy rules that mean the file is private.

That’s what I did. But once the file is private it won’t go through the API connector. Even if the privacy rule say that the user can view the attached file.

Please note that the concept of “private” in the API connector is about making that data available for further use in expressions.

Yes, but I’m not talking about this private option in the API connector ; the issue is about sending through the API connector private files, i.e. files that have been attached to a thing to control who can access it

Privacy rules do not work for backend logic. They are meant to allow or to limit data to be sent to the browser.

Same issue here, I can’t send a private file through the API connector.
Did you find a solution ?

So I hope this will help you guys.
So this is the only way I found (after a looot of time on this issue…)to send a private file through an API.
I generated a token in the Settings/API section.
Then before to use the encoded in base 64 function on the file you need to add the token into the file url by adding: /?api_token=xxxx
with “xxxx” the api token generated previously.
Here screenshots: 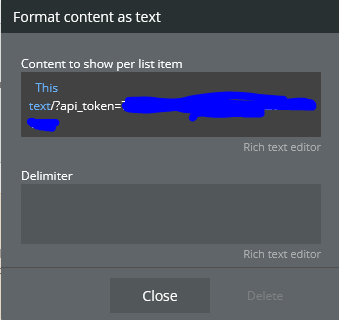 In the delimiter i add a “space”