I have setup a project app which has repeating group tasks, which are dependent on each other: 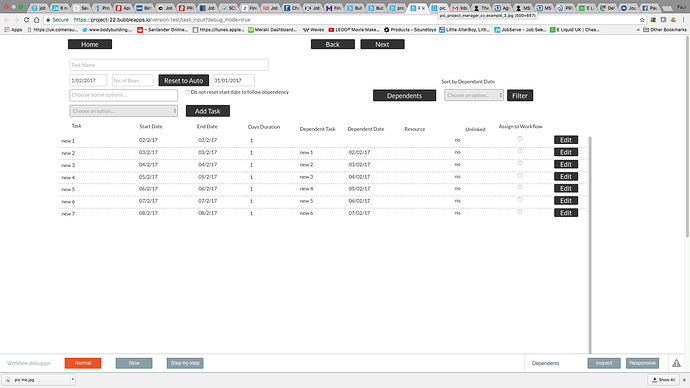 This is achieved by saying the task when added, if it has a dependency, to use that dependendies end date +1 as the start date to the new task. So far so good.

If I go in and change the date for “New 1” however to 10 days it updates that task, but now all of the other tasks, which are dependent on that on and each other are “wrong” in that they are not following that date: 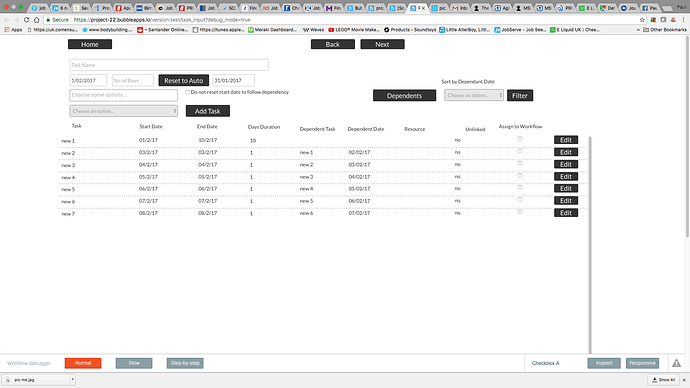 I have tried every which way to build my “dependents” button so when I click on it, the logic parses each task in the repeating group and checks the dependent task it has, and updates itself accordingly to the new date - so in this instance “New 2” which is dependent on “New 1” would change the start date to 11/2/7, then “New 3” would update itself to follow “New 2”'s end date+1 and so on, until the group has been updated: 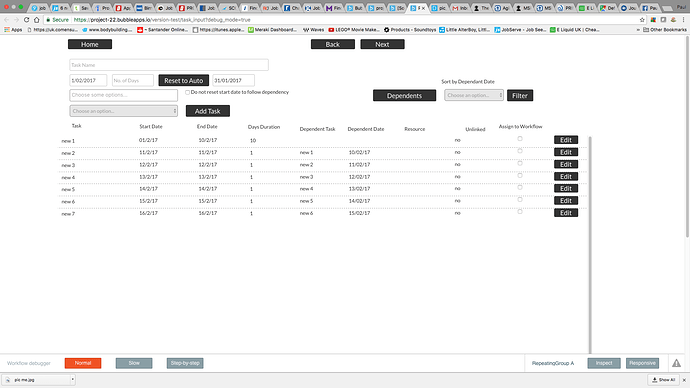 I achieved what is shown in the screenshot above by going in to each task individually and updating each task, then it works. How can I get the “dependents” button to update each task in the repeating group by just clicking it once?

I have every way I can think of but I am starting to think it just cannot be done in Bubble.

Sounds like you might need to run an API workflow on a list of things. I’m not super good at that, but I know @romanmg just sent out a newsletter that talked about this very thing. Maybe she’s got some words of wisdom here.

Updating RGs like this is totally a mind-warp sometimes. I received your booking request, and we can definitely work on this together, but in the meantime, I want to direct you to this post linked below that helped me approach this kind of RG manipulation in a very clever manner. Now, the original issue in that post is more complicated than what you’re doing, but you’ll notice that the main piece is identical. Change one item and have it “auto-update” the rest. Definitely check it out and see if you can apply the parts you need to this. Otherwise, I’ll look forward to our session to tackle it together.

Can anyone recreate this spreadsheet functionality? Database

I’ve updated the example to meet your specs. An observation I’ve seen is that some calculations are not immediate (since it’s scheduled); thus, the values may be delayed or incorrect. The issue is pronounced if an input (or series of inputs) is changed in rapid succession. While it works, it’s not something I would put into production at its current state, unless you restrict the user until all processing has completed. Preview: https://examples.bubbleapps.io/version-test/dependent_cells Edito…

And yes, scheduling an API workflow on a list could also be a solution, but there are some drawbacks in this scenario with delayed updates because Bubble often spaces workflows out between each item, and if you have 100 tasks, it’s going to seem like it’s not working to the user, when in fact items down the line are just in queue.

I tried this link and unfortunately does not seem to work anymore.; is there another link to this now?

Hi Paul. Ah, sorry. I didn’t see that it was removed. If I can get another sample up for you before our call, I’ll send it over.

That is very very clever.

For some reason, the preview link doesn’t work, but the editor does. I haven’t touched it since.

Edit: The preview link had a typo. It has been updated.

Thank you for that. Scott has been directly looking at the workflow I am trying to use but we haven’t cracked it yet. This workflow example is slightly simpler in that it assumes it will always take the value above it and then adds to it, whereas although in my example for simplicity that it is how the tasks are, in reality there could be 10 tasks dependent on one task, and spread out all through the RG so you have to look up the dependent task, change the existing tasks date, then move on. I am aware one of the issues with this, as Scott and I have discussed, is the order it would process - I was trying to sort the RG first to have it in end date order to allow the dependencies a chance to work top-down and complete the dependencies on each other.
Still, the dependents only processes one task at a time, so you have to hit the button for every task in the list until they all update.