I’m having serious problems with Math.js initialization. I’m using Bubble’s API connector to post API calls to Math.js API. It used to work fine but since today (maybe yesterday) the calculations in our app aren’t working anymore. When I tried re-initiazing the call I get the following error:

"There was an issue setting up your call. 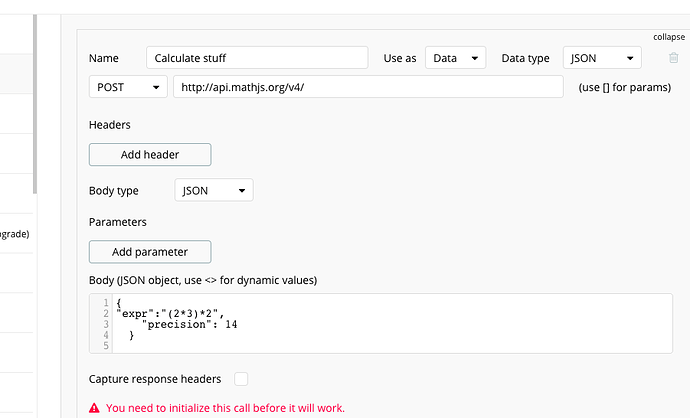 We use this to calculate prices and now this doesn’t work anymore resulting in people being unable to book which is costing us our revenue. Any help would be really appreciated.

I can’t give an answer to your question, but I was experiencing some problems last week with a plugin in my app that uses math.js (it’s been working perfectly for the past six months, up until last week).

It just stopped working for a few hours, the debugger was saying something about an issue with DNS for math.js, then it started working again after a few hours.

Then a few days later it stopped again, and the debugger was giving a different error, again mentioning math.js

So there may have been/still may be an issue with math.js recently.

For us it seems to be working fine again now, but we’re keeping an eye on it.

Hopefully the issue you’re having is just temporary as well.

I reached out to the math.js creator and what did the trick was passing content-type: application/json as a header in the API call. Now it works again for me.

I reached out to the math.js creator and what did the trick was passing content-type: application/json as a header in the API call.

How exactly do I “pass it as a header” when API connector is asking for a key and a value? Which one’s the key and which one’s the value? I still keep getting “this header name is not correct undefined”

like this, you type the key “content-type” without the quotes and the value “application/json”. Happy building.