My app has 2 types of users:

The Project Owner would be the one to create the Project Contributer accounts.

But I want to make sure that people can be invited to multiple different projects (like if a person is contributing to two different projects, I don’t want them to not be able to become a User in the second project just because their email is already in the database from being a User of the first project). I want them to have a separate account for each project. But Bubble creates new users based on email, so I don’t know if there is a way aroung Bubble blocking the creation of new users based on the same email. I don’t want people to be forced to use different emails for every account that they have.

I’m thinking that maybe a third field, say ‘‘ProjectName’’ in the user setup could help differentiate the user accounts (let Bubble know that even though the email is preexisting in the database, it should set up another account based on the ProjectName).

Does anyone have any ideas? I just want to stay away from users having to go in and make their own accounts, and join projects themselves…

I hope that makes sense - thank you!!

That will allow you to create users without an email address

At of curiosity @shaun , how would the user login again without him or she knowing the email with which the user account was opened?

You would also set a username and password and use those for the logins.

However after re-reading the post it appears that the users would already be registered so there isn’t actually a need for this.

I would handle this differently and just create a field called owner (single user lookup) and a field called contributors (List of users lookup) for the project entity.

Then in filters I would set it so that owners can see their own projects and contributors can see projects that they have been added to. 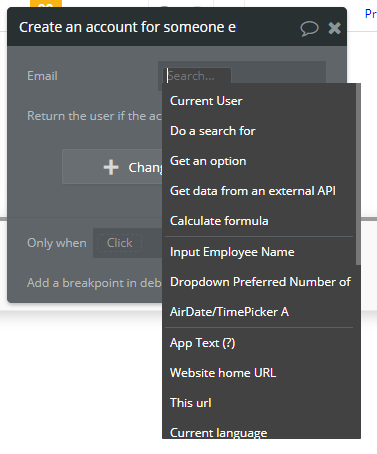 Thank you Shaun! Can I ask how you would set the email as ‘’{{randomstring}}[email protected]’’? It won’t let me just enter text into the input

I then select use letters, use non capitalised letters and use numbers with 15 characters.

Hey Shaun, sorry I’m so very new at this I might be missing something. This is how I have the button/workflow set up (I don’t know where to input ‘15 characters’): 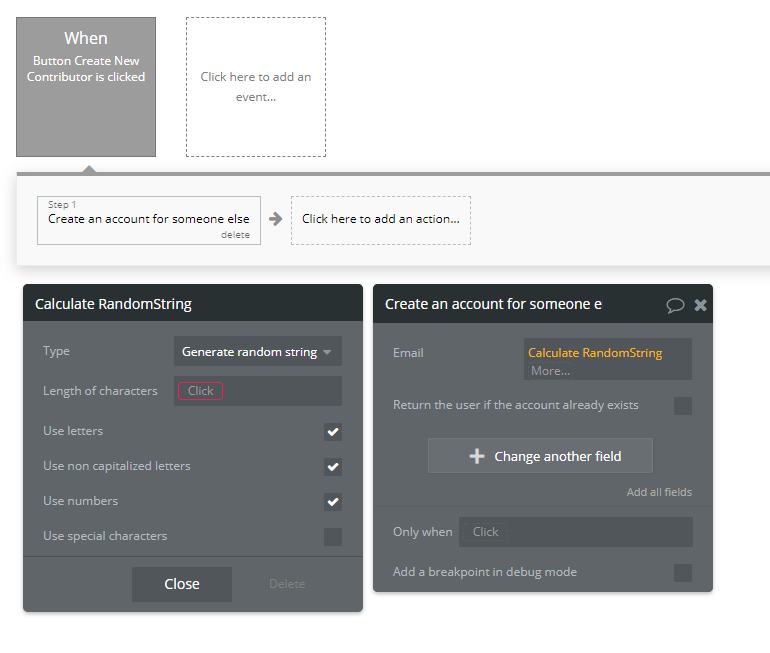 In the preview, when I put someone’s name in and press the button, it still tells me to put in an email: 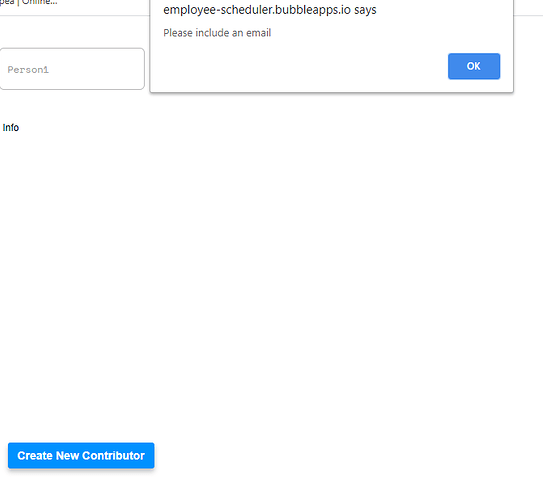 @shaun Also to make things a little more complicated I don’t have a domain yet.

So I have an input on the form which is set as an email and the initial content is “{{randomstring}}[email protected]” (I guess I’ll hide that input in the run mode). But maybe that’s why it’s not working?

I finally got it to work, my apologies!!! This works great, thank you so much!

Sorry I missed these. Glad you got it all sorted out

Hi, what is the difference between creating an account like this and just doing it through the sign up popup? You are still inserting an email, only that it is a fake email

Or am I wrong?