Yes, I am also using autosave

As a friendly reminder, it’s generally faster to get help from the team by either filing a bug report or emailing [email protected] - our Success team is very on top of both those channels, but the rest of the team may not be constantly monitoring threads, especially ones that started a while ago like this one.

@allenyang thanks - the support team is fantastic, i had great help from them.

But I wanna make sure it’s a bug before i bother them. I found that many times i thought it was a bug, it’s a dependency issue. I suspect it’s the same thing for many other users - so Bubble would really save on a lot of support tickets if it could solve the dependency issue.

I’ve read the section on Order of operation many times, but sometimes Bubble behavior is still puzzling to me. See this example. 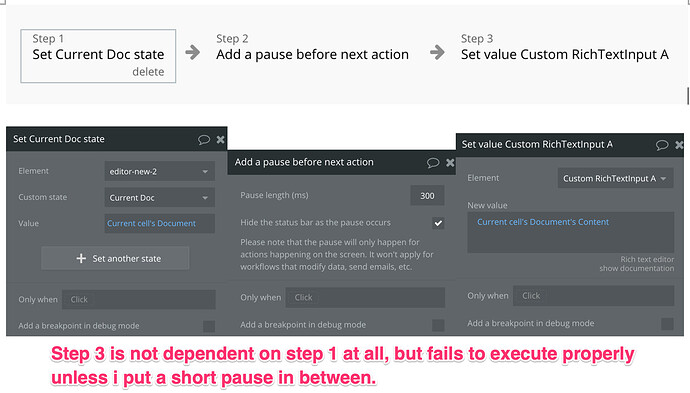 Ok so Bubble helps speed up by parallel execution, but ends up causing issues and i still got to introduce these “pauses” which slows down the app - kind of defeats the purpose! Hope Bubble can come up with a solution for this.

Something is just weird with the RTE plugin around auto-binding, not exactly sure what it is. I disabled this, and implemented my own auto-save workflow (it’s also way faster). So far it’s not causing issues…fingers crossed.

When will the ability to change the default font size & color be added?

This is great. When will this be available for the rich text editor within the actual bubble editor that we all use? That thing is so frustrating