I’m going around in circles with the Stripe app for some reason (Bubble’s own version).

When I first tried this it worked perfectly first time in the test environment, when I launched it to live it broke. I then managed to get it to work, but only on my device, if I try any others it breaks by saying an error message that “there is no such plan xxxxxxxx”. One thing to note is that when I first installed it I only created a plan/product in the Test environment (which explains why it broke when I pushed to Live).

I then followed the steps below to troubleshoot:

Regardless of all of the above, I’m still getting the error message coming back that “there is no such plan” etc etc and I have no idea what I’m doing wrong.

Any help on this would be massively appreciated, it looks like its worked quite easily for everyone else as I couldn’t find anyone having similar problems that weren’t resolved with the above steps.

Hey.
I was having the same problem. I’ve solved it by using the plan’s ID instead of the name. You have to check the “Make plan name dynamic option” and add your plan ID where the name field was before. If you want to be able to use the plans both in live and test version use the “Is in Development mode condintion”. Check the link bellow.

I think Isn’t live version is the Boolean that should be used now (seems like an update on Bubble’s Stripe API end): 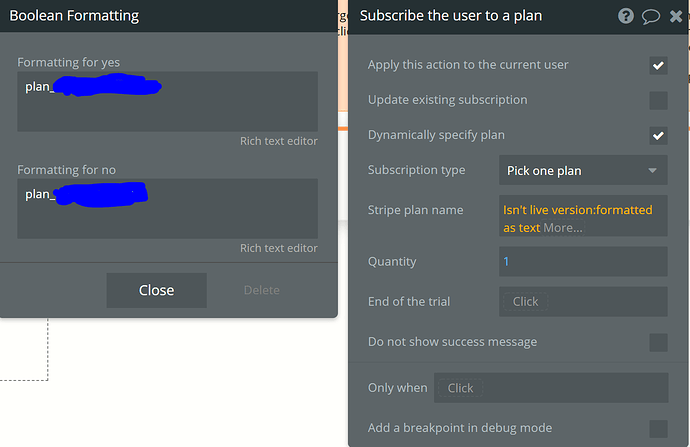 A+++++ On this resolution! I was having the same error and for the life of me couldn’t figure it out. The drop downs only have the TEST version of Stripe products and I couldn’t figure out how to make it use the LIVE Stripe product IDs, but this solved it. Really wish the plugin was a bit easier to operate, I lost 3 hours of my life on this one item.

Hi guys. I’m experiencing the same problem. In the boolean format inputs, do we enter the live prod ID or the test prod ID? or both?

is solved it. Really wish the plugin was a bit easier to operate, I lost 3 hours of my life on this one it

Haha, I’ve been stuck on this for 3 days. Very confusing.