The date when a thing has been added to a list of things?

it is me again…

Can I make a seach/filter based on when a thing has been add to a list of things?

Users can create collections (data type = list of things) of lets say cars (thing=cars). So they now have a thing which is a list (called cars) and now they can save things (cars) to their list of things.

NOW another user can FOLLOW the list of things which the other user is creating. I have setup a search where the user gets all the things from the severall lists of things he is following. Also the search does consider when was the last time the user did take a look at his feed of cars. It is all working great.

My problem now is that I want to filter the feed so that the user gets only the cars which have been added to a list of things within the last 24 hours of the last time he visted. It isworking with creation date (creation date of the car/thing) perfectly: 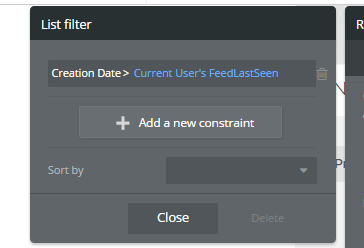 What I figured out I can not do:
Modify the date of the thing which the collector puts on his list. This will not work because other user may have put this thing on their list a long time ago and the field would always be modified whenever somebody puts it on his list of things.

Modify the date of the list of things because this would effect all other items on the list.

So basically what I need is the date/time when this particular thing has been saved to the list of things.

Is that possible? If yes, how?

Thanks for any help!

Create a new data type that has “Date Added” and well as the thing itself ? And use that on the user’s list instead ?

…you are right this is the only way. Damn, this means I have to adjust workflows and repeating groups…but you are absolutely right. Thank you!