Kicking off a new thread to announce updates to the Version Control feature that we will be releasing over the coming months.

We realize the Version Control feature is really important for teams and products that are looking to scale on Bubble. While the feature has gone through some iterative improvements in the past, we also recognize that it is not reliable enough for production use. We hope to change this and turn the Version Control feature into another powerful tool in a Bubble developers toolkit.

To do this, we have a two-pronged approach. The first is to improve the reliability of the feature by improving the algorithm and test coverage. The second is to improve the overall user experience and feature set to make it even more powerful. As many of you know, most of the Bubble business is run on a Bubble app. As such, the north star for this Version Control feature is to create something that we are proud of and confident using in-house to manage the complexity of developing a very large production application.

The reliability work is well underway - @zoe1 has been spending a lot of time focused on this and has already tackled a number of known issues and bugs. Research into the next phase, improving the user experience, has started and we are very excited for some of the planned updates.

Thanks everyone and looking forward to future announcements!

To kick things off, we recently updated the Version Control feature to automatically create a save point right before a version is merged. This new save point has been really helpful internally in terms of debugging bad merges, but now also allows you to easily revert a version to right before a merge in case things didn’t work out as expected.

You’ll find this new save point in the version history modal - example below. 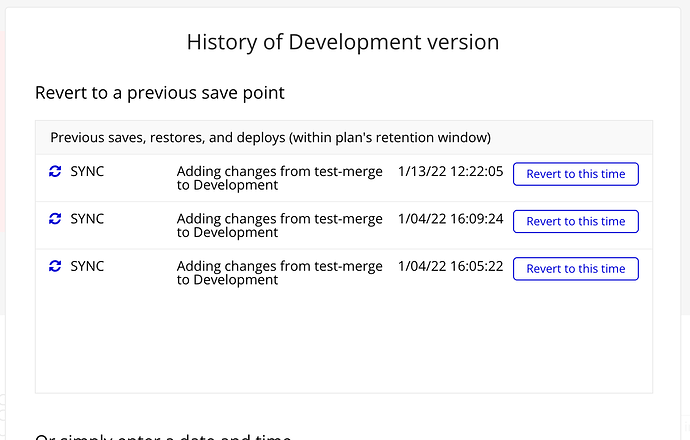 To kick things off, we recently updated the Version Control feature to automatically create a save point right before a version is merged. This new save point has been really helpful internally in terms of debugging bad merges, but now also allows you to easily revert a version to right before a merge in case things didn’t work out as

Thanks @nickc for the update and @zoe1 for working on this! Can’t wait to see where it bring us

Sure this is helpful. But with all the issues stemming from version control - including losing DAYS of work, multiple times, due to the undocumented ‘rules’ of hierarchy and version control - this first update just falls flat to be honest.

(To be clear, this update would not even help recover work that is lost to version hierarchy issues. And that’s just one of many problems.)

Version control is broken in many ways and has been broken for quite a while. We have to put WAY too much thought into over-managing versions so we don’t step on any known land mines - and we find new landmines in version control rather often.

And getting right to Emmanuel’s core value of getting as many people as possible building on Bubble, we simply cannot hire entry-level Bubble developers because version control is broken. It is simply impossible to manage contributions from less experienced devs with version control in its current state.

And we have had a LOT of applications from entry-level devs we just have to turn down. It’s heartbreaking.

It doens’t help y’all or us to stay quite, so I hope this is helpful. The value Bubble delivers still far, far outweighs this negative, but let me tell you, version control is just frustrating and really, really worrying right now.

This is helpful feedback, and definitely hear your frustration. I think everything you said is spot on and we want to change that with the updates we plan to make in the near future. Version control should be an asset, not a liability.

Thank you for your reply.
Could you please share what the known landmines are so rest of us do not “step” on those ones?

Already used tons of times that tip and found no broken stuff.

@nickc I’ve heard you guys say many times that the bubble business is created within bubble itself, out of curiosity can you explain how far that extends?

Do you guys just have an internal CMS, bug tracking, support tracking, website, template store, and similar created using bubble or are parts of the core builder actually built with bubble as well? Would love an elaboration to cure the curiosity.

Great question! Essentially everything outside of the app editor itself is built on Bubble - ie internal cms, website, template store, academy page, and marketing pages (as you mentioned).

We recently received a question asking if we had any recommendations about how to use the version control feature as it currently is. We thought it might be helpful to share these responses with everyone and this thread is a great place to do so!

When adding changes from one version into another, there may be many changes that have been made to one or both versions since the last time these two were synced up. In that case, for every change detected, the above comparison will be made to determine what the outcome of adding changes from Version 1 into Version 2 should be.

We also wanted to share some recommendations about how to use this version control feature.

We recognize that this approach might not work in every case but these are some general recommendations that we would make.

I hope this was helpful. We’ll continue to keep this thread active as we improve this feature!

We are experiencing strange behaviors since February 8th. As it was mentioned:

We also wanted to share some recommendations about how to use this version control feature.

we are creating new versions for each new feature or quick fix, but recently it has had reliability issues.

After closing my browser and waiting 20-30 mins I can finally access the newly created Version, but this is concerning whether version control is actually stable.

Thanks for flagging this behavior - will look into it with @zoe1

+1 to this, filed a bug report and was told they cannot reproduce, but I’m having the same issues, in particular with creating new issues.

We’ve finally been able to reproduce this issue consistently and a fix is underway. It was a regression introduced about a month ago by a completely unrelated infrastructure bug fix. We will also be adding more tests to basic version control functions to prevent this from happening in the future. Thanks all.

Glad to hear a fix for this is in progress. Same behavior here. If I wait 20 minutes or so I can access the new branch.

Hey all - fix should be live. Let me know if you are still bumping into this issue.

Hey @nickc having another recurring issue - I’ve filed a few different bug reports, but think you should be aware: when merging from a separate version into development, very frequently elements either (1) get dropped, (2) get weirdly duplicated (i.e. they show up twice in element tree but then when selecting one of them, it selects both of them).

This has been happening lately in particular with reusables: if I build a reusable in the other version and merge it back to development, the reusable doesn’t come through, and then I get an ‘app level’ error saying ‘this reusable cannot be found’. Strangely, the name still appears in the list of RUs, but when I click on it it takes me to index.