This seems straightforward, but I’m struggling to get it to work… I’ve tried the following:

I’m getting a fairly non-helpful Status 400 error from the external provider.

Any help on this? Be greatly appreciated!

Did you make sure the parameter is checked as a “query string”?

On the back end workflow?

Should I be going with the callback to the /wf/ call or via an /obj/?

From my experience, wf and using a query string. Obj is only if you’re trying to return specific data “things” from what I’ve understood

Edit: I’m sleepy. Obj is for modifying and creating data

Edit2: if parameters are coming from a url, they are “query strings” and need to be labeled as such in Bubble. Hope that helps!

It does, here’s my challenge though… the backend workflow needs the parameter named as “hub.challenge”. Bubble won’t accept the . below: 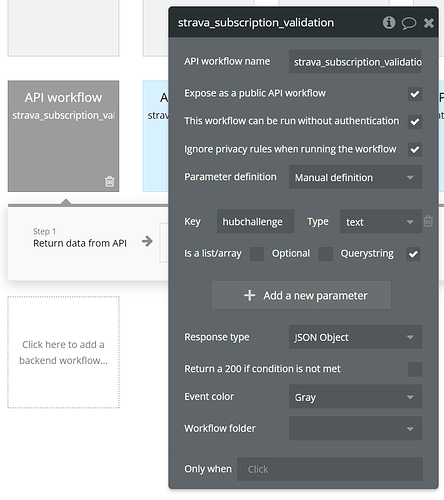 I can define that with the “.” in the Return Data from API call: 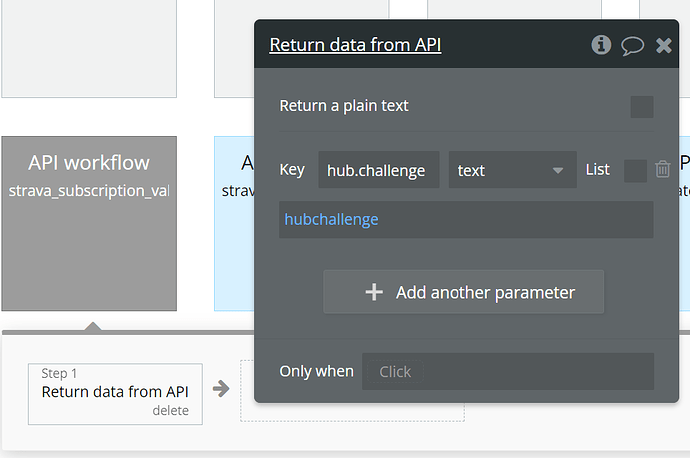 But my guess is that since the initial isn’t defined correctly with the “.”, it’s not grabbing the parameter from the URL. Is there another way to do this?

Edit: you can also try using the “detect parameters” feature. Click where is says “Manual definition” for Parameter definition and change it to “detect” or however it is worded. Then run the we hook once and it should automatically find the parameters

I put that in and now seems I’m getting a different error, so maybe making progress?

I tried putting in the Return Data from API, code as a parameter and 200, but didn’t like that.

Here’s the developer info if it helps at all: Strava Developers

Can you check your log to see what was sent when this backend workflow is triggered?

One other issue: I don’t think Bubble backend workflows can work with GET. You may have to use a third party solution such as Integromat. I ran into a similar error just a few days ago where the third party webhook wanted the JSON response without the “status”: “success” key and only expected the response body.

So I have this working with Pipedream; however the issue with that is it doesn’t seem to support multiple users, just the initial one. Maybe I need to work more there, but I was hoping for an “all in one” solution around this.

The logs don’t seem to help much:

Should I expect the POST command in the logs to show all that’s sent? This doesn’t seem to show the parameters that I have in the API call. I’ve also tried as both “Action” and “Data”.

I don’t think Bubble has the capability to handle this webhook. I would explore integrating with Integromat. There are a couple good forum posts on how to do that.

Thanks, I’ll give that a go. Appreciate your help!

My pleasure. One note regarding Integromat: I could not get it to link with Bubble via their “native bubble connection” setup. I just ended up calling whatever Bubble API workflow I needed using the http request action.

Did some work on this and think I’m making progress finally. Issue I think is since it’s multi-step, back to the redirect URL, that I’m not picking up all the values.

So the flow is: 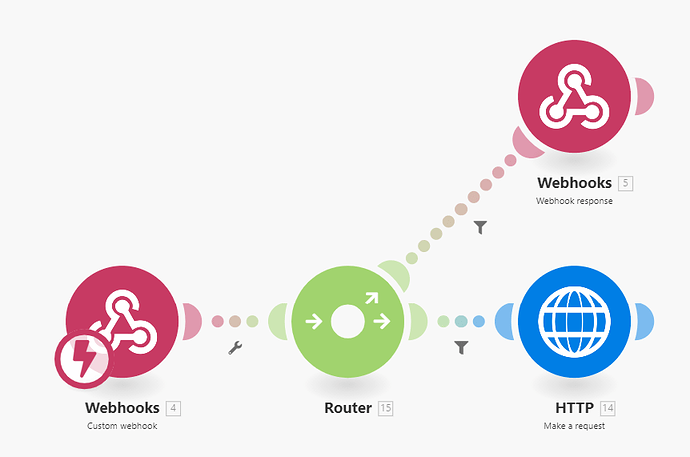 Am I on the right track on this?

Also, I’m not entirely clear on what should happen once Strava receives the response from Integromat.

EDIT: Are you even using any data from Bubble after the initial POST to strava?

So the way I understood it…

Hits the redirect URL with the GET command and the code (this is the first step)
Need to return the code & status 200 back from the GET (this is the webhook response)
Strava is supposed to them return a subscriber ID. I had this as the branch off the router making a POST to Bubble to create a new thing with the subscriber ID

Somewhere I’m not getting the Strava response back from the webhook response. It’s like I need a second listener to get that after the Webhook response or am I misunderstanding this flow?

I think you just nailed it. The action you built here is to respond to the GET which confirms that you have permission to do this (I think). You will need a second webhook to listen for the next response to then send the subscriber ID to Bubble via the data API. This would be a backend workflow to modify a user or whatever data “thing” you are storing the subscriber ID in. Remember to check that you are allowing the data API to access this data “thing” and that the privacy settings allow it to be modified via API.

It seems like that subscriber ID should be returned to the original POST from Bubble… hmm… I wonder if you should change the workflow to the following… bear with me:

1. Send Bubble POST to INTEGROMAT (Webhook #1), NOT Strava
2. Have Integromat initiate the request for subscriber creation (via Webhook #1) but set the redirect URL to Webhook #2.
3. Deal with the validation on the Integromat side (Webhook #2)
4. Capture the response in Webhook #1 and send it to Bubble via a “obj” backend workflow to write the subscriber ID to your database.

I’m sure there is probably a way to do this all in one webhook… but I’m not the best with Integromat and this is the first thing that comes to mind.

Scratch all that… you just need to reinitialize the API workflow where you’re sending the POST and it should now capture the subscriber ID.