I’m excited to announce a new Account workflow action. You can now send a magic link to your users via email to allow them to login with the click of a link! 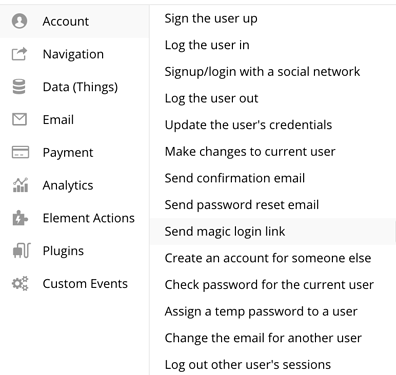 You can customize the email content, including the text for the link itself. The link will log the user in, then take them to a page that you specify using the field “Navigate on login”. The link can only be used once, and it expires after an hour. If an error occurs, such as the link timing out, the user will be taken to a page you can specify using the field “Navigate on failure”. 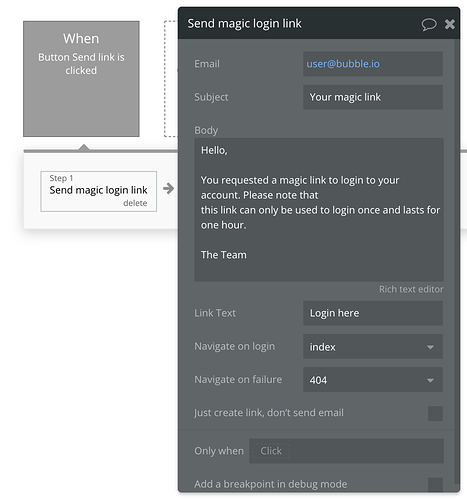 If you use your own email service to communicate with your users, you can also opt to just create the link and not send an email, then use the result of this action in another workflow action.

To get more info on this feature, check out the manual page here.

Saw what you did there

Really looking forward to implementing this for easier login.

@sam8 could this be used to sign people in without passwords in a workflow?

@sam8 Are you saying the problem with only being able to send email confirmation with sendgrid (which is a very very bad thing because sendgrid sucks and there is no guarantee of delivery) is solved?

@alejandrowunderlich what do you mean by “modern ux flows”.

I’m with @cowontherun. Liking the sound of this but am trying to envision what use cases this might support. Wanting to catch the “vision.”

I’m with @cowontherun. Liking the sound of this but am trying to envision what use cases this might support. Wanting to catch the “vision.”

This article should help. It also discusses the security implications.

@sam8 any way to get the option to set how long the link will be valid until in expires?

+1 on this. An hour really limits the use case on this.

However as others noted, how long the link will last?

@sam8, what’s the possibility of adding the functionality to include custom URL parameters to the redirects? That would be really helpful for implementing this in login flows with additional steps (ie custom 2FA) that are implemented after the user is logged in.

@sam8 Is it possible to add the “Data to send” field similar to the “Go to page” action? 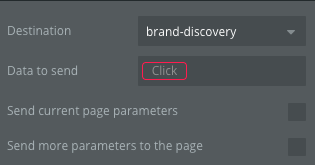 We are looking into this! We aren’t intentionally stripping extra url parameters, but have noticed that this is an unfortunate by product. Looking into supporting this use case - thanks!

Great suggestion, feel free to add this to the ideaboard, we review these submissions weekly when putting together our roadmaps

Anyone was able to “Navigate to the link URL”?? I tried here and nothing happened…

I couldn’t retrieve the link as well….

8 days ago a developer @sam8 posts with “excitement” about a new feature. And then a whole bunch of questions come in, including questions to understand how and when to use it, and its only until 6 days later that another person from the company comes in and addresses but one of the many questions and then suggests that another idea go to the infamous idea board.

There are so many problems with this I dont even know where to begin.

The dev has not responded to anything. Clearly their was excited was limited. “Hey cool. Whats this for?”. Chirp chirp. “Hey nice, can I use it for this scenario?”. Chirp chirp. If I had worked on something for a bit of time and then released it into the community and I was legitimately excited about it the first thing I would be doing is selling the shit out it.

But nope. Its just dumped into the forum like garbage.

I also dont know who asked for this feature. Im not saying its not good nor that no one was asking for it - im just saying that Ive never seen a post asking for it. Its not been a common point of pain.

What I have seen are a insanely large set of old threads that get bumped every month but have seen no response. One such example is email verification. How do I do email verification without sendgrid. I can cobble my own solution together but as far as I cant tell the only official way to do this is with the bubble user type is with sendgrid. I even ask in this post - can it confirm emails. Chirp chirp. and theres a lot more.

There are countless questions / product issues that just remain unresolved. Feature requests lost because no one from the company engaged.

Which leads me to this next thing…

There is a treasure trove of feature requests, pain, suffering and anguish in these forums. A goldmine of data. Yet the team asks people to make suggestions on the idea board because that is where they choose to be fed from.

If i managed the team of product managers at bubble and single one said “go to the idea board” I would fire them. Ok i wouldnt fire them but there would be some very strong coaching going on. I can pay a high school student to manage an idea board at $7 dollars an hour. I would absolutely absolutely expect every product manager to be mining through the data in the forum to get insights into what the real problems and opportunities actually are. There are tools you can build to help with this. I’d certainly be looking at ways to distill the data. The fact that you are “actively” watching the idea board when there are many super old and still relevant issues that you are not resolving tells me that no one is actually steering this ship. Its just adrift in the sea of “excited” developers whims.

No offense @nickc but I dont know how a PM can suggest an idea board when there is so much data available. Im not saying turn off the channel but telling someone “great suggestion” then asking them to put it in form you desire otherwise it it wont be absorbed is just simply and utterly ridiculous.

I dont get how you guys appear to be so absolutely disconnected. I keep saying this. Bubble is amazing but the lack of customer focus is stunning. It’s almost like some macabre work of art.

The people who engaged on this thread were interested enough about the topic and certainly engaged enough with bubble to have deserved an answer. At least a “we heard your questions - we’ll document more, get back to you etc.” But nothing like that. Just a one off “cool” and “to the idea board you should go”.

@emmanuel this is a culture of your creation. I’ve seen these old threads where you were clearly very responsive. And you can see the immediate effect on the attachment and loyalty that it seemed to evoke. But it seems you’ve been silent for a long time.

Edit:
I should add - a large part of how you position bubble is for the non technical folks. “You dont need a tech co-founder” is one of your value props right? So a lot of your communication should really be focused on speaking to these non technical folks. What is it. Why is it useful. But how is some business person trying to get their idea of the ground by themselves going to be able to digest the value of this feature? Who exactly was this message aimed at?