We’re really excited to announce multiple versions, a feature we’ve had in the works for quite a while that we hope will make life significantly easier for a lot of you.

As it stands, a Bubble app has two versions: Development, which you edit, and Live, to which you deploy your finished changes. As apps become large, life can become complicated as Development is shared between multiple people and projects. Having multiple development versions solves this problem: each developer can work on his or her own version, and hotfixes can be segregated from ongoing development. 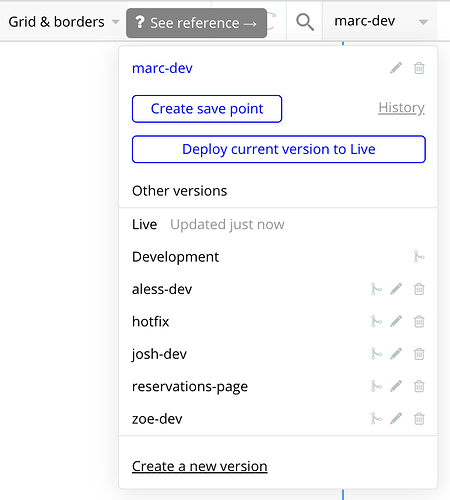 Versions can be created, merged with one another, deployed to Live, renamed, and deleted. As is currently the case, each will maintain its own history, and will be able to be rolled back to any point in time, either to a specific time or to a defined save point.

When one version is deployed to Live, others will become out of sync with Live, meaning new changes have been made elsewhere that are not yet incorporated. At this point, users of other versions will be prompted to sync with live, a process that will import the new changes into their version. If two changes conflict—for instance, if two users have changed the name of a button to two different values—the user will be prompted to choose which change to keep.

Multiple versions will be available on Production and Dedicated plans. Pricing details can be seen here, and documentation can be found in the manual. As always, let me know if you have any questions!

Amazing you guys, I am so psyched for this! Thank you, thank you!

This is incredible! You guys are constantly knocking it out of the park.

I initially balked at the pricing changes - Then I actually read the updates and am pleased. Currently on the professional plan - Now with 3 reserved units (up from 2) and daily scheduled workflows (up from weekly).

Overall, I feel good about the extra $40/month.

$475/month for git (and obviously more) seems a bit much, but we all have pricing choices to make!

@marca Is this included in Agency plans? It would be very helpful for working with other developers!

I can’t express enough how disappointing it is to hear that this feature is not available for all paid plans.

I knew the moment private money came in these type of things would happen.

Yep, while these are great features, seems like Bubble is starting to price a lot of them out of reach for most individuals.

Big Increase price for every plan. But a lot of increase to different thing in each plan too. I think you should have something in middle of Personnal and Pro plan. I think a lot of people may stop from going to Pro plan from Personnal plan because of the large price difference.

Existing paid user are not impacted

Despite the price plan, it’s a great feature to have! Thank you Bubble

Prices really increased too much. In my poorly managed country, $ 1 = TL 5.50, imagine me.

Yeah, I’m gonna have to move from a professional plan to a personal plan. Let’s see how the performance works.

@eren
If you are already on a pro plan. Keep it.
The price and capacity (and other function) will stay at the same level you currently have.

Thank you @jici I did not know that

Just wanted to confirm: if you are currently on a paid plan, your pricing/features/etc are not affected by this change. You can choose to update to the new plan pricing and features, or to remain on your current plan.

Why is this showing for me?

Yet i already pushed to live?

I also can’t click anything after i push to live until i refresh the page. Bug?

Happy to look into this for you; please email us with a link to the app that’s having this issue!

@marca Is this included in Agency plans? It would be very helpful for working with other developers!

@Bubble will you consider agency plans for this. Ity would be really helpful for us and the clients we help to become customers?

I can see this becoming a hot topic especially the pricing entry requirements for this. Maybe you can release this as an addon for lower plans!