The Ultimate Guide to Bubble Performance - 156 pages of optimizing tips 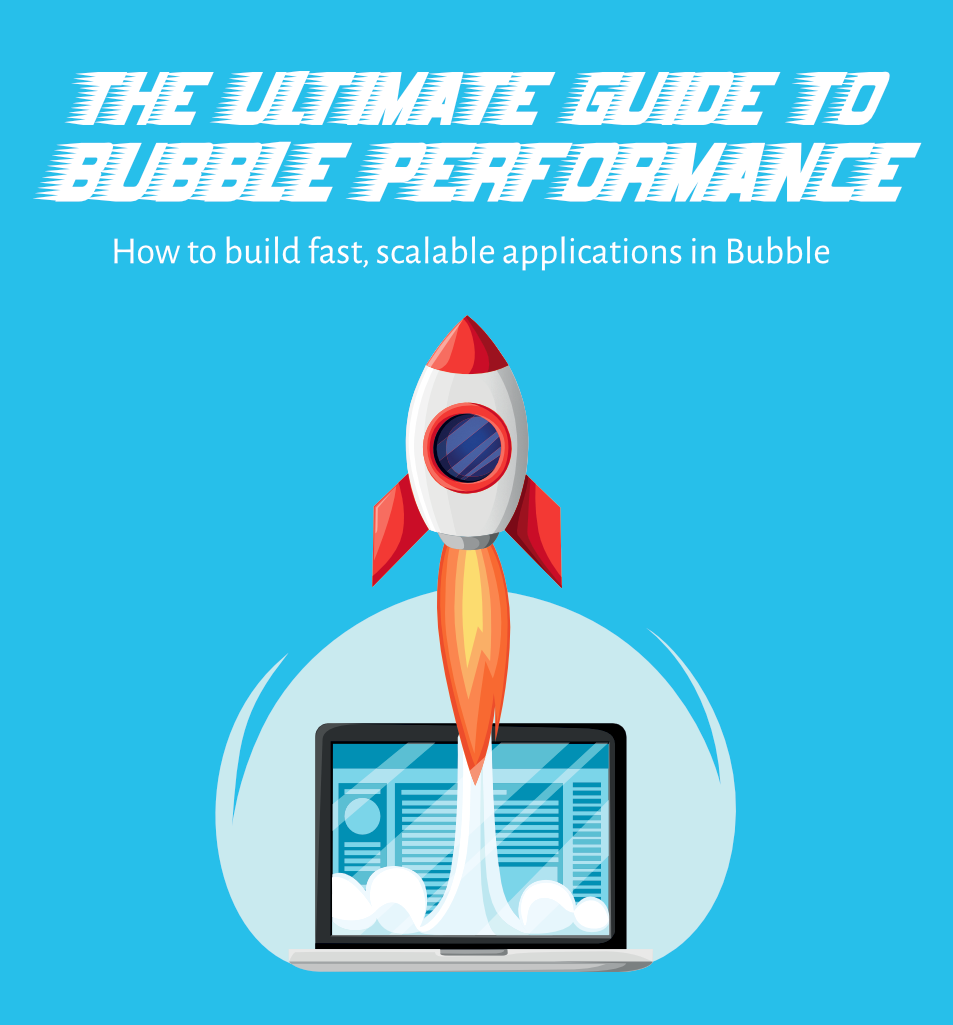 It’s a 156 page PDF available on Gumroad that dives deeply into the hard-earned lessons I’ve learned over five years of full-time Bubbling, focusing on:

Pay what you want
I’m releasing it on a Pay What You Think Is Fair model, meaning you can pay whatever you think the book is worth or you feel you can afford, down to 1 USD. I sincerely want it to be a valuable resource, so I’ve even decided to offer a full refund if the book for any reason fails to meet your expectations.

Read a lot more about the book and its content here, and I would love to hear what you think about it - both the good and the bad.

56 Likes
Bubble Speed FAQ
Limitations of Using the "Created by = Current User" Constraint in a "Search for"?
Looking up a relationship in reverse?
Are Custom Events or Scheduled API Workflows faster?
shpak.serhiy December 15, 2020, 6:31pm #2

That’s awesome, thank you so much for the purchase!

Would love to hear what you think after reading

Hi Peter could you show some examples of apps built that are “lightning fast and scalable” using your tips?

From all the bubble apps I’ve seen so far they are not fast and that was a trade off for using bubble’s other benefits.

Good work, it sounds awesome Petter! I only wish I had time to read 156 pages

@alexreed92
It’s difficult to answer that question, since one of the main points of the book is that performance can mean very different things, depending on what your app does (as an example, page load can be important for one app, while rapid data processing can be the main feature of another). Both performance and scaling would mean completely different things in those two scenarios.

You bring up a fair point though. One way to go could be to set up a companion app for the book where I highlight different scenarios with preloaded data. That would be useful not only to illustrate different methods, but also to give users a chance to see for themselves what kind of results they can expect to achieve and assess Bubble as a potential platform.

I’m not sure the subtitle is doing the book any favors to be honest, and I might change it. I’ll happily admit that it was thought up in the span of a few seconds while learning how to set up Gumroad, and it’s very unequivocal in precisely the way that I’ve taken care that the book is not and thus kind of contradicting some of its points. I actually spend the first portion of the book going over what I consider to be some of Bubble’s limitations from a performance perspective.

It’s pretty late here, but I’ll give both of those points some thought.

Edit: I edited the subtitle from saying “lightning-fast” to “fast” for now, to avoid it sounding hyperbolic

Purchased (for 5… Not as much as I’d like to spend, sorry, but I’ve no more job because of this fucking virus) and shared in Twitter!

Can’t wait reading it, I’ll learn a lot from it! Thank you for this book!

Sure you could build an accompanying app with the book but this is not what I asked.

You must have an application built yourself with these tips right? Would you mind sharing it with the forum. I see you have posted an app in showcase a while back,
Our app is live – and I need a peptalk!, seems to not be available.

This book seems genuine for improving bubble performance but like you said what is the definition of fast. Is it fast just by bubble standards? A real world example would be great, since all the notable apps I have seen are sluggish. I think bubble is great tool for many reasons although performance is terrible.

Easy to read and well done.
Page 36 make me remember too

@alexreed92
Hmm, unfortunately no, since I work mostly with closed client systems, I don’t have any readily available public apps. We have a public commercial app in development that may serve as an example for some scenarios, but it’s a few months away still. Happy to share it when it’s live and I’ll see what I can do about setting up a showcase app.

@JohnMark
Thanks for the kind words! Those were the days, eh?

Great to have everything in one place instead of trying to recall which forum post I saw something in. I always hope to learn two new things from a course or book but if I learn even one it will be worth the $25 suggested price. Thanks for taking the initiative.

@petter Just purchased it, thank you so much for preparing this. It is indeed as @shpak.serhiy puts it, the missing book. I’ve gone only through a few pages and there is a lot of good stuff here. Definitely worth it.

Thanks for the kind words guys! Makes my day to hear that you’re enjoying the book!

I’ve bought a copy, thanks this will certainly help me

Aha 156 Pages. Bubble complete reference material and manual are shorter than these books.
Surely, I will grab my copy. I see lots of help after reading your Forum tip on the reusable elements post.

Yeah @vinodbhadala , @petter’s forum post on reusable elements A guide to advanced use of reusables was probably the single most valuable thing I’ve read on the forum. His one on the things he had learnt using Bubble Things I've learned while building complex apps was almost as good. That’s why I had no hesitation buying the book. I’m planning to unplug and spend the weekend reading.

Finished reading – well written and constructed, and also very thoughtful about how to think about speed and accomplishing it! Even though I’ve read a lot already on speed and data structuring, I learned some new things.

Any chance to get the link of this post?

Great point @Christophe_HK - I have edited my earlier post to include the links.