Getting creative with RGs & Option Sets!

Hi all, some random Bubbling building out a horizontally scrolling repeating group with sorting, pagination, and a dynamic number of items displayed per page. All in vanilla Bubble

There are some advanced methods in here but it’s good for all skill levels! Enjoy!

Play around in the editor: https://bubble.io/page?version=test&type=page&name=index&id=elissandbox&tab=tabs-1

Cool video. I haven’t done too much with option sets so this was helpful to see. That 72 option filtering task you mentioned near the beginning sounds like a nightmare hahaha.
Thanks for posting this.

Thanks Eli, I hadn’t thought of using Option Sets in this way. So this was quite illuminating.

Great stuff @eli - Thanks for keeping me entertained during this quarantine

I hadn’t thought of using Option Sets in this way. So this was quite illuminating.

Imo, Option Sets are completely underrated and one of the most useful features in Bubble! Glad to be of service

Ha! Happy to do my part, Brandon

Shout out to @eli for putting aside the time to put this together, thank you!!

Thanks for sharing this @eli, very useful.

I used it to modify my previous approach for constructing a 20x20 grid and using it in my rpg-helper app that I just launched in a first version.

Found it to be a bit faster than using the ‘List of Numbers’ (from the Toolbox plugin) as the base.
Still a bit slower than I would like but better is still better.

i was banging my head against the wall trying to figure out how to make a horizontally scrolling table.

not only would I have skipped over option sets as the solution (when I first saw these appear in the editor, i simply shrugged my shoulders), i don’t think i would’ve ever figured out the conditional text fundamentals to make the whole thing work. 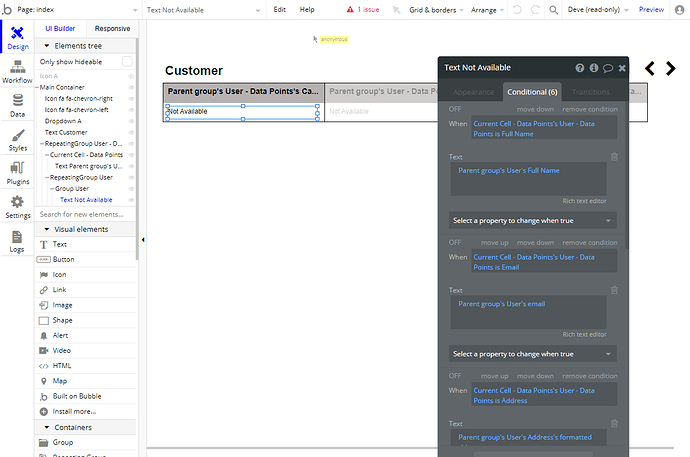 Happy it was useful!

@eli is there a way to sort by multiple criteria? i.e sort names alphabetically and by status?

Also, if i have “non primative data types” eg. A list of a custom Data type, how could I use that as an attribute in my option sets?

@eli — this was as awesome video! For a relative beginner, there is a wealth of possibilities in here. Thus, thank you for doing this!

I do have a question: I’ve used this to experiment with a set up similar to the Netflix streaming home screen when you first log in. Scroll up and down for genre or category, and side to side in that category. Do you think it is possible to set up a condition where it passes over a row (referencing my version of this) and then makes that row disappear from view if there is no content? Example: if you have 3 rows; Comedy, Drama, Horror…and there was no Drama, could that row somehow be set to condense down so that just Comedy and Horror appear, with no blank row/gap inbetween?

Hopefully that makes sense…and if you can lend a thought, that would be awesome!

@eli thanks for making this video. I was blown away at the additional possibilities of option sets.

Re RGs, have you tried making it so that users can ‘freeze’ columns? For example, making a sticky leftmost-column as default, and potentially allowing the user to expand the freeze selection?

I’m building a comparison site that relies on robust filtering of tables to query my DB so the closer I can get to full ‘pivot-table’ functionality like you’d have in Excel/Google Sheets is the aim. Any other tricks you’ve come across that would help me to that end would also be appreciated.

That would be great!

Took a look and didn’t see anything about sorting based on option set. Any way to do that which I’m missing?